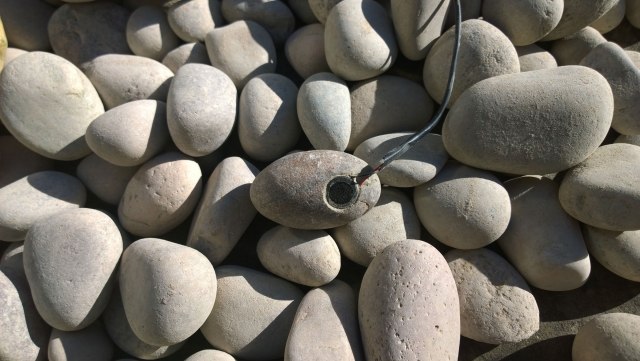 At the opening of the current Fringe Arts Bath exhibition at 8/9 New Bond Street Place, Bath, I saw – and heard – Alun Ward’s new sound installation, Sea Hear. It sparked in my mind a set of associations about the idea of rocks speaking.

Sea Hear comprises a miniature beach of sea-smoothed pebbles, some of which contain microphones. If you hold one of these to your ear, you hear a voice telling a personal memory of the sea. A different voice, a different story, in each pebble. Alun asked people to record ‘a memory of the sea’, but nearly all his volunteers chose to record a memory involving a beach. It seems apt. Listening to the pebbles in turn conveys a sense of hearing a selection of the memories held in the stones of a beach continually washed and reconfigured by the waves. When I returned to Sea Hear after seeing the rest of the exhibition, the basement where it’s located was deserted, but Alun had left the installation switched on. I heard the pebbles all simultaneously whispering their stories to each other, as if they were inspirited in some way and able to carry the memories of the beach independently of whether any human beings were listening.

This experience put me in mind of the storyteller Hugh Lupton’s idea that landscapes hold a memory of all that has happened or been imagined in them. It’s an idea with roots in indigenous cultures around the world, and one that Kirsty and I applied in making field visits to the locations of the stories we retold in our Folk Tales books – and in a new book, Gloucestershire Ghost Tales, we’ve just delivered to the History Press. Probe deeper behind this notion and you come to animistic perceptions that the elements of the landscape, even non-living ones like rocks, contain spirits, a consciousness of some kind. There are remnants of this in the Bible where it speaks of stones or mountains crying out or bursting into song. And in Seneca mythology a ‘Storystone’ tells people stories that then become part of their culture.

A lot of the geology I studied at university was about reading the history of events that’s held in the rocks, whether in an individual specimen, a field outcrop, or a whole sequence of strata. Whenever we gathered around an outcrop, shivering in the wind, fingers too numb to grip our pencils and notebooks, one of the tutors or postgrads would say to whichever member of the team was most knowledgeable about the locality, ‘So what’s the story here?’ This gave me an idea for a novel narrated by a granite boulder in Scotland, conceived as sentient and able to observe and describe everything that happened around it, throughout prehistory and human history. Years later, during my MA, I did try to write a modest – too short – version of this idea as a short story; but long before that, by the second year of my undergraduate studies in geology, the idea had morphed into a different approach, involving a less static point of view, which eventually became Deep Time.

Alun’s sound art is an engaging way of getting stones to speak directly to our imagination – by wiring them up so they actually do speak. I noticed that quite a few visitors would initially pick up one of the pebbles that didn’t have a microphone and listen for a while before putting it down. I wonder what they might have heard. The exhibition runs till 7 June, so there’s still time to see – and hear – it if you’re quick. You can also record your own sea memory to include in one of those virgin stones.