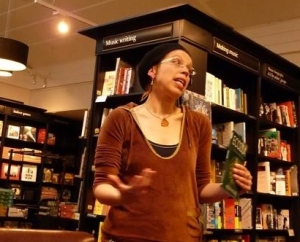 On Thursday – 21 May – I was in Waterstones, Bath, with Martin Large from Hawthorn Press and poet Helen Moore to promote Helen’s new collection, ECOZOA, and my novel, Deep Time. Chairing the readings and discussion was ecocritic Richard Kerridge, of Bath Spa University, who kicked off by remarking how both books respond to the challenges of scale that arise in grappling with the global environmental crisis.

Helen (pictured) explained that her book’s title refers to ecotheologian Thomas Berry’s coining of ‘Ecozoic’ to refer to a coming age in which humankind lives in a mutually enhancing relationship with the earth and its creatures – in preference to the anthropocentric term ‘Anthropocene’ that some use to refer to our present age. She also explained how the four sections of ECOZOA take inspiration from Blake’s four zoas, reflecting different aspects of the human being, and read a sample poem from each section.

I talked about the principal ideas and motivations that fed into Deep Time and have made my book a composite of different literary forms: adventure story, nature writing, literary fantasy, romantic drama, as well as ecobardic evocation of the big picture of prehistoric time. I performed, in storytelling style, an extract from an early chapter when my characters encounter the first evidence that animals unknown to science may lurk in the forest they’re surveying.

Richard then opened the session to the audience and what turned out to be a rich and wide-ranging discussion, largely about questions of how culture engages with nature. There was talk about cerebral and embodied knowledge, Darwinisim and coevolution, propaganda and authentic values, biophilia, and the ways any and all of this are clothed in language. When we were out of time, and the sales and signing were done, some of us adjourned to the pub and carried on the conversation.