Cecil Collins and the Holy Fool 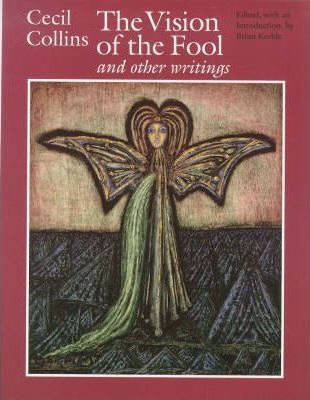 I have a hazy memory, from my early twenties, of attending an exhibition of work by William Blake and also Cecil Collins at the Tate. It can’t have been an exhibition of major works, because what I remember are works on paper: sketches, notebooks, letters, and the like. I’d never heard of Collins before, but what struck me was the visionary quality the two artists shared, and their propensity for writing as well as drawing and painting.

Flash forward to April Fool’s Day 2000, when at a seasonal event at Rocks East Woodland, Kevan Manwaring read out an extract from Collins’s seminal essay ‘The Vision of the Fool’. The event was memorable because it was there that I met my wife. We didn’t speak much on that occasion; the only thing I remember her saying to me was her one-word reply to my enquiry what the novel she was writing was about: ‘Vampires.’ But Collins’s notion of the Fool remained with me also – an archetype he’d divined as symbolising what it means to really be an artist and a spiritual seeker in a materialist age.

It’s extraordinary that most of the Collins essays gathered in The Vision of the Fool and Other Writings were written in the 1940s (two date from the 1960s, and there’s a long, definitive interview with editor Brian Keeble from 1979). Extraordinary because they are so powerfully prophetic of the situation of culture and spirituality many decades later. Collins fingers materialist society in whatever form – capitalist, fascist, communist – as shutting down the reflective inner life that is the wellspring of artistic creativity and the appreciation of beauty. So you have to be a kind of holy fool to go against the grain.

I’m very wary of the term ‘New Age’ because it serves these days mainly as a pejorative frame with which to dismiss from serious consideration (in a Western context) any kind of spiritual endeavour – except Christianity, which gets dismissed for other reasons. But, long before the New Age vogue in the bookshops in the 1990s, Cecil Collins was proclaiming ‘The Artist in the New Age’ in 1965. The roots of his own mysticism and iconography are manifestly Christian, but whereas he describes David Jones as a great artist evoking the dying of a tradition – Christianity as we have known it – he looks forward in his own visionary painting to a necessary rebirth of spirituality, which is characterised more than anything else by the embrace of the divine feminine.

Reading Collins’s essays, I noticed an inspiring resonance with the thinking of Lindsay Clarke as expressed in his essays collected in Green Man Dreaming, which I had the honour of publishing with Awen late last year. They strike me as men on a similar mission, the one seeking to express his spiritual odyssey through painting, the other through writing stories. I commend both books to you with all my heart.