Myths, Genres, and Forms in Northrop Frye’s Anatomy of Criticism 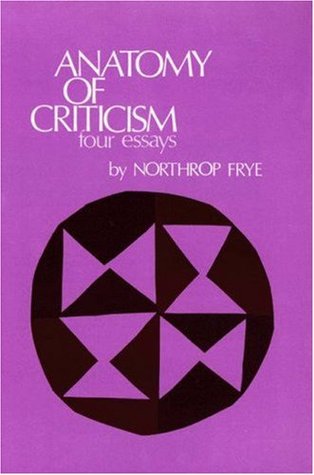 Northrop Frye’s Anatomy of Criticism is a landmark of literary criticism to which I found my way via its influence on the Tolkien scholarship of Tom Shippey and Margaret Anne Doody’s superb book The True Story of the Novel. Frye’s discussion of the function of the imagination also reminds me of the thinking of Ted Hughes and Lindsay Clarke.

Frye organises his grand analysis of the whole realm of literature by means of various dimensions – ‘modes’, ‘symbols’, ‘myths’, ‘genres’, ‘rhythms’, ‘forms’ – all of which terms he defines in his own ways that don’t always match more familiar ways of understanding them. What I love about his taxonomy of literature is that he doesn’t try to force books into a small number of procrustean categories, but instead he sets up continua or fields containing countless potential gradations or mixtures. For example, his theory of ‘myths’ may be pictured as a wheel of fortune, in which different nuances of narrative pattern rotate from ‘comedy’ at the wheel’s summit, via the downbeat trend of ‘irony/satire’, to ‘tragedy’ at the nadir, and then upbeatwards via ‘romance’ back to comedy.

In his chapter on ‘genres’ Frye insists that ‘fiction’ be defined not in contrast to ‘non-fiction’ but rather as the genre of literature in which prose predominates. He regards as ‘fiction’ any prose writing that may claim to be literature, and argues that prose that’s determined to present itself as purely ‘non-fictional’ will inevitably slide either towards emotion-laden rhetoric devoid of intellect (propaganda, advertising) or towards flat propositional language devoid of emotion (technical and most academic writing). The effect is to collapse into the same arena of ‘fiction’, alongside novels and short stories, genres like memoir, travelogue, nature writing, and indeed anything we might normally regard as ‘non-fiction’ – so long as it’s written with some kind of literary quality.

Frye goes on to analyse fiction in terms of four primary forms – ‘novel’, ‘confession’, ‘anatomy’, and ‘romance’. Here ‘novel’ has nothing to do with the length of the narrative; it refers to fiction populated by psychologically realistic characters, in contrast to the more stylised archetypal characters of ‘romance’. ‘Confession’ is basically the form of autobiography, narrated in the first person. ‘Anatomy’ is the form of fiction concerned more with exploring ideas than characters. The title of Frye’s own book – Anatomy of Criticism – implicitly acknowledges that even so analytical and scholarly a book, because it engages the reader with literary skill, may ultimately be seen as a work of fiction.

You may try to seek pure examples of each form, but in practice they are blended in endlessly varying combinations. Most ‘novels’ contain some admixture of ‘romance’. Frye elucidates Joyce’s Ulysses as a work of fiction in which all four forms are present and of more or less equal importance. He doesn’t mention Tolkien, but it occurs to me that, though The Lord of the Rings may seem most obviously a ‘romance’, it also contains substantial ingredients of ‘novel’ (concentrated in the hobbit protagonists) and ‘anatomy’ (the encyclopaedic examination of history, geography, and lore); ‘confession’ occurs only in the ‘editorial’ paratext with which Tolkien frames the story – and perhaps in the occasional Gandalfian monologue.

I can’t resist applying this lens to my own novel, Deep Time. It’s a ‘novel’, for sure, having a number of psychologically complex characters, but it’s permeated also by systems of archetype and symbol characteristic of ‘romance’. It is written in first person as an intimate ‘confession’ and is also an ‘anatomy’ in its kaleidoscopic exploration of geological time and the relationship between wild nature and being human. I take comfort from Frye’s observation that novels containing a strong element of ‘anatomy’ usually baffle the critics when they first appear.

This entry was posted in Fiction, Literary criticism and tagged Anatomy of Criticism, Deep Time, Fiction, forms, genres, myths, Northrop Shippey, The Lord of the Rings, Ulysses. Bookmark the permalink.