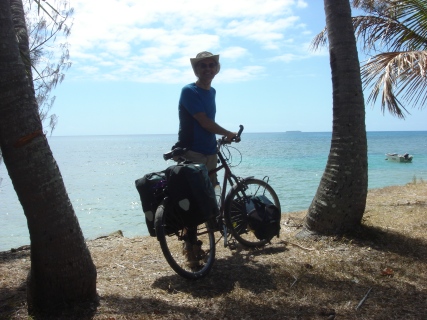 The first thing I need to report about my expedition to New Caledonia is the incredibly generous hospitality I received there. From all kinds of people: indigenous Kanak, white Caledonians, metropolitan French, and other expatriates. They welcomed me into their homes, their tribes (the Kanak reservations), their parties, they gave me introductions to others who could help me, and most importantly – my reason for going there – they talked with me at length about their lives and their thinking. All this on the strength of a couple of introductions secured shortly before I left home, and my declared purpose of researching a book. The bicycle played a role too; it put me in a position of needing more help than I might otherwise seek, even just to get as far as Heathrow. But more fundamental was something articulated by one of the Caledonians who invited me into his home: a spirit of hospitality that’s deep rooted in Oceanian ways of life, including among the Europeans who’ve settled there.

So it was humbling and challenging to return to England and contemplate how willing we are here to welcome the stranger. It’s a personal challenge, for one thing. In my busy-busy lifestyle, the endless emails, the endless hustling to make a living, to find an audience for my creative work, to even do the creative work, how much time am I willing to give to people I meet, how much disruption of my routines to have guests to stay? But the bigger picture is much graver. Even before the EU referendum campaign got going, a Romanian friend told me that the public discourse about immigrants was making them feel unwelcome in England, uncomfortable about being Romanian. Negative attitudes to the presence of immigrants were pivotal to Leave’s victory in the referendum. They may not have been the only reason to vote Leave, but that winning share of 52 per cent makes it look as though such attitudes are respectably normal.

The same impulse to put the interests of ‘us’ before ‘them’ is being exploited in the US election and is gaining ground everywhere. New Caledonia is not immune. I did, a couple of times, encounter hostility from young Kanak men. With an independence referendum coming up in 2018, there’s a polarisation between Kanak seeking national liberation and other people who see their interests as more secure under the French state. The way all that is going to pan out may depend on the quality of political leadership. The great Kanak statesman Jean-Marie Tjibaou is still missed.

In Kanak tradition, much is made of the ‘word’ of the chief: the idea that when the chief speaks, his word carries a symbolic force whose effect may far exceed his material power in the community. This has given me a perspective on my own support for Jeremy Corbyn. The calculus of electoral politics is placing enormous pressure on British politicians to talk tough on immigration, to chase the votes of the 52 per cent. Corbyn resolutely refuses to do that; he will not speak words that make immigrants the target of our grief about our deteriorating economic circumstances. Maybe he doesn’t have all the superman skills to be a Blair-style CEO of the nation. Maybe he needs a committed, capable team to take much of the burden of that work. But his compassionate ‘word’ – spoken from a formal position of leadership where everything is at stake – has a symbolic power that our society desperately needs.

3 Responses to Kindness to Strangers