Helicoptering over the Rainforest 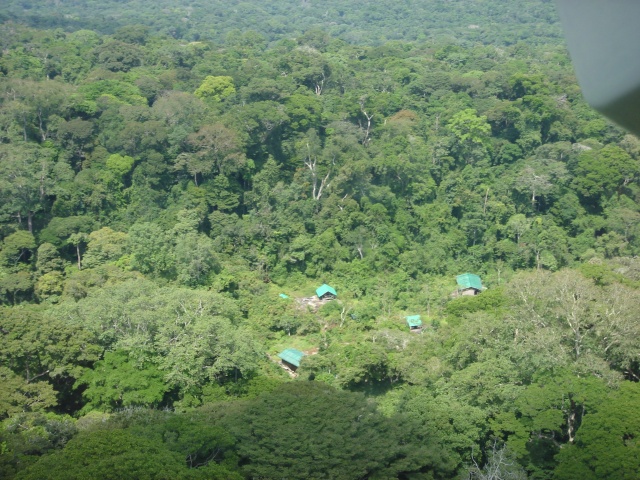 I’d already written a couple of drafts of Deep Time when I finally saw first-hand the Central African forest my story begins in. Unexpectedly, I ended up going there by helicopter and so got a privileged view of hundreds of miles of forest from the air.

Gabon was always my first choice for experiencing the African rainforest, because the forest was largely intact there, and the country was safer than some of its neighbours. Through a connection at the Natural History Museum the opportunity came to spend a week as a volunteer field assistant with an entomologist based at the World Conservation Society’s field station in Ivindo National Park.

First I had to get there. There was no road from the capital city Libreville. The plan was to travel by train with the field station’s manager, who happened to be in Libreville, to a logging centre where WCS had a local office. We could drive from there to the park boundary, and thence hike to the camp.

When we got to the station, however, the railway was closed because a goods train up the line had been derailed by an impact with an elephant. There might not be another train for days. I only had two weeks in the country, so my chances of getting to Ivindo looked slim. Then something happened so improbable that it seems like a miracle.

A camera team scouting locations for an American TV programme wanted to film in Ivindo. They couldn’t do that without the manager – who of course was stuck, like me, in Libreville. That very same day, the President’s daughter intervened. She thought the TV programme would help to promote Gabon, so she arranged for the manager to be transported to Ivindo on the President’s personal helicopter. I got to go with her. We picked up the camera team from another national park, Lopé, on the way.

In many tropical African countries much of the forest has been cleared, but in the helicopter I was granted a vision of how the land had once had been everywhere in that region. From Libreville in the west to Ivindo in the east, it was nearly continuous forest all the way. From above, the treetops are like an endless expanse of broccoli, punctuated by the occasional bright globe of an individual tree in flower. There was very little sign of human beings; many of the tracks we glimpsed among the trees were elephant paths. Circling above Ivindo, we looked down on the tiny scatter of tarpaulin-covered tents of the field station (pictured), the only human presence in a wilderness still the realm of chimpanzees and gorillas.

Shortly before my visit (in 2008), ten per cent of Gabon’s land area had been set aside as national parks. How long the rest of the country’s forest will survive is another matter; in the WCS office in Libreville I met a woman from the US embassy who thought it ‘inevitable’ that most of the forest would be cleared as the country developed. What I experienced inside the forest when I got there is perhaps a topic for another post.

4 Responses to Helicoptering over the Rainforest