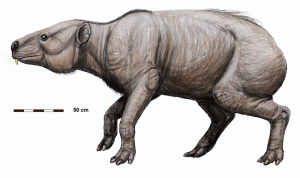 When I was growing up, all the books about mammals would gleefully tell you that the nearest relative of the elephant is the rabbit-sized hyrax. Molecular biology has since revealed that elephants and hyraxes belong to a diverse group of animals originally unique to Africa: the Afrotheria – Greek for ‘Afro-beasts’.

The reason they came about is that from 100 million to 20 million years ago Africa was an island continent the same as Australia is today. So after the dinosaurs became extinct (65 million years ago) a group of mammals in Africa was able to evolve, undisturbed by competitors from other continents, to fill the different ecological niches, just like the marsupials did in Australia. When the Africa landmass made contact with Eurasia about 20 million years ago, there was an invasion of more aggressively competitive mammals that drove many Afro-beasts into extinction. Not all of them, though. Besides the elephants and hyraxes, the surviving Afrotheria include the sea cows, aardvark, and the little tenrecs, golden moles, and elephant shrews.

Africa did have some other specialities that were not related to the Afrotheria, such as the primates, which, being clever buggers, managed to cross the Atlantic to South America by rafting. But it was extinct kinds of Afro-beasts that filled most of the niches of medium-sized to large herbivores. The arsinotherium, for example, like a massive rhino with two colossal horns positioned side by side on its head; many funky different kinds of elephants; giant ‘elephant shrews’; and all manner of giant hyraxes – ‘hyracoids’, like the two-metre titanohyrax (pictured) – that for a time were the dominant medium-sized ungulates until the pigs, antelopes, and horses invaded from the north.

The real Afrotherian success story was the elephants. Nothing could compete with them and they were able to migrate against the flow, out from Africa to all continents except Australia and Antarctica. They only met their match with the rise of human technologies to hunt big game.

Information about extinct Afro-beasts other than the elephants is scarce. Moreover, the region where Deep Time is set – the Congo Basin – is palaeontologically underexplored. So in the relevant part of the novel I had a field day imagining different kinds of Afrobeasts and how they might have looked and behaved. Let me say, though, that – contrary to rumour – I did not make up any of the animal names mentioned in Deep Time. When my narrator encounters creatures unknown to science, or legend, I simply have him speculate which groups they might belong to.